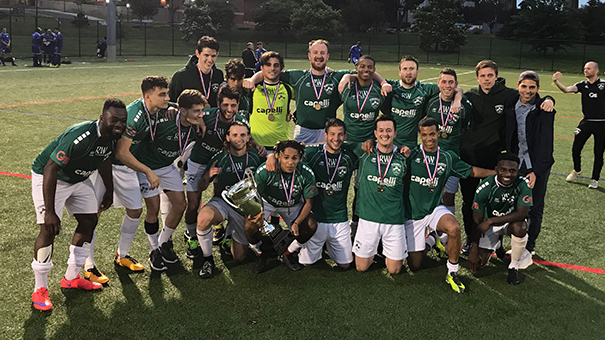 The Cosmopolitan Soccer League is gearing up for the restart of the regular season next weekend (March 16/17) as teams look to make the final push on their respective table standings. Before that though, the initial rounds of both league cup tournaments (the John Kilby Cup and Harry J. Saunders Cup) will kick off this Sunday, March 10, with First Round matches across the city.

With team’s competing from nearly every division in CSL, let’s take a look at the match-ups.

Teams with byes into the Second Round:

Cedar Stars Academy Reserve enters the tournament on top of the Division 1 - Reserve league table by a full two games (28 pts) over second place NY Shamrock SC Reserve (24 pts). The team, which also leads their league in goals scored (39), goal differential (25), and sits at second in goals allowed (24), last played on Dec. 9 in a win, 3-1, over Zum Schneider FC 03 Reserve.

Their opponent, NY Athletic Club Reserve, will be looking to jump start its spring campaign with a tournament win. NYACR only have three wins through ten league games this season as the defense has struggled, letting in 31 goals. Goalkeeper Marc Hartmann will need to be up to task and keep the Cedar Stars squad out of his net if his team is to advance.

The winner of this match will play Doxa FC in the next round, which currently sits at 8th on the Division 1 table.

Match 2: Beyond FC vs FC Ulqini

The next First Round match pits two teams currently sitting in the middle of the Division 2’s South Region table. Despite sitting lower than their tournament opponents, Beyond FC started the 2018/19 season by dispatching FC Ulqini, 5-2, on Sept. 9. Beyond’s Sergio Gomez, who scored three in that aforementioned game, is currently serving a suspension barring him from participating. But the team still has goal producers like Mike Lowell and Abrahim Hamami who could pose a threat to an often scored on Ulqini backline.

FC Ulqini enters the tournament with one of the strongest offenses in the entirety of Division 2 as a whole. This comes as a follow-up to the teams 2017/18 season which saw the club secure promotion from Metro Division 1 with an astounding 68 goals scored and 12 allowed on route to an undefeated, 17-0-0 record. The team went undefeated in league play last November and outscored its’ opponents (FC Japan and Stal Mielec NY) 12-6. With a defense that currently sits at fourth in most goals allowed in the D2 South Region, Ulqini will need to keep the ball often and not give Beyond any chance to exploit its backline if it wants to advance.

The advancing team will play 2018 Kilby Cup winners NY Shamrock SC (pictured above) in the Second Round, which enters the second half of the season in third on the Division 1 table and in playoff position.

In the first game between two teams from different divisions, Central Park Rangers Whites (Div. 1) and Williamsburg International FC (Div. 2 South) meet as both clubs find themselves on very different trajectories. CPR White’s struggling offense, tied for last in goals scored with 11, has produced zero wins for the team through 10 games. The team’s biggest accomplishment this season has been being the sole draw on an otherwise perfect NY Pancyprian Freedoms’ record when the two clubs played to a 1-1 final on Oct. 28.

In Division 2 South, Williamsburg International FC is currently on track to outdo its 2018 record. With a record of 5-3-1 (18 pts), and games against two bottom table teams to start the second half of the season, WIFC will be looking to shake off some rust in this First Round match. With an offense that is tied for most goals scored (32) lead by midfielder Mark Gallagher and forward John Kaddo, who combined for seven goals in the first half of the season, the team will be looking to strike early against CPR White.

The winner of this match will move on to face Zum Schneider FC 03 of Division 1.

The final First Round match, two more similar teams from separate divisions face off for a chance to advance in the Kilby Cup. After its’ first team secured promotion from Division 2 last season, Hoboken FC 1912 Reserve has produced a 3-3-4 record (12 pts) entering the tournament. Last season’s second most productive goal scorer Samual Omosuyi is currently leading the team with three goals this season while newcomer Gianluca Ranallo sits at two goals through six games played. The team ended 2018 going 1-1-1 in its’ last three games.

Stal Mielec NY Reserve sits at the opposite end of the table compared to its first team counterpart in Division 2. After finishing 2017/18 with the third highest producing offense in Division 2 - Reserve’s South region, multiple team call-ups and departures have left SMNYR struggling entering the second half of the season. The team finished 2018 on a three game winless streak, being outscored 9-2 over those games. With three teams currently tied for last in the south region, a good start in 2019 could propel the squad out of the basement and into similar success as the first team (who currently lead the South Region of Division 2).

The winner will face off against NY Athletic Club’s first team in the Second Round.