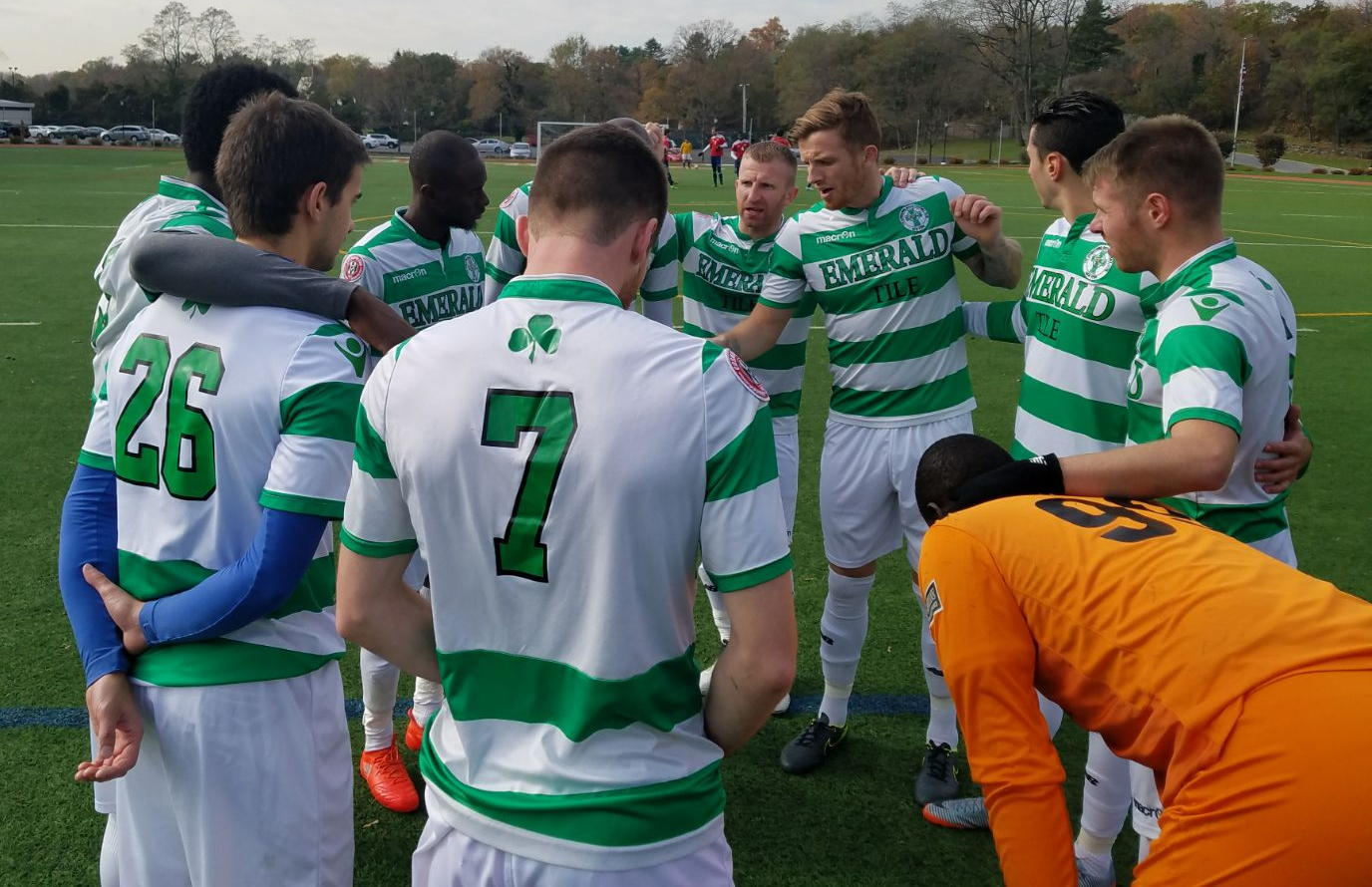 Lansdowne Bhoys players in a huddle.

National double champions Lansdowne Bhoys will play their most important game of the season so far on Saturday: the last round of the Lamar Hunt U.S Open Cup qualifiers against Junior Lone Star U-23 (PA) home at Tibbetts Brook Park in Yonkers at 8:00 p.m.

The Irish team's captain Sean Kelly shared that he, his teammates and the club’s board members are counting the hours before the match that will decide if they will play in the most prestigious soccer competition in the U.S or not.

“We as a club cannot wait for Saturday night, these are the games the club deserves to be playing in and Saturday we hope to go one step further of putting the club’s legacy on the map,” Kelly said.

The former Arsenal youth player previously said: “The team and management board have set certain targets to achieve this season for the club moving forward and qualifying for the U.S open cup is one of them.” Kelly also stated that although they will face a U-23 team the Bhoys won’t take the game lightly.

“Saturday is a huge game for the club but at the end of the day whether it be against Doxa SC, NY Shamrocks or Junior Lone Star U-23 our approach will be the same as always and that’s to do our jobs, work hard for each other and get the job done.”

He later added: “On the day anything can happen, I’m sure this Junior Lone Star U-23 team is going to be a good, organized young team, it's going to be a big test for them coming to New York to play the national champions and I’m sure they will be hungry to get a result in but like I said once we all do our jobs and work hard for each other, play the way we can the rest will take care of itself.”

Junior Lone Star has one of the most talented U-23 amateur team in the Northeast Region. The West African's team U-23 players reached the USASA U-23 Region I semifinals last season and clinched the third round of the Open Cup qualifiers in their first season in the competition by defeating Salone F.C 3-1—a team that entered the qualifiers with two years of experience—and edged one of the most historical amateur clubs in Philadelphia, United German Hungarians, 3-2 in the second round.

Kelly noted that the Bhoys’ experience and work ethic will be key in their goal to conquer the youngsters.

“It’s going to take hard work, determination and quality to beat a young team,” the 30-year-old captain said. “We will be hoping that having that bit of experience on our side might just get us over the line but nothing is guaranteed in a cup competition.

Junior Lone U-23’s captain Siafa Dempster admitted that Lansdowne’s players have more experience than he and his teammates but that won’t stop them from giving their all during the whole 90.

“We may be young but we’re super excited,” Dempster said, according to Front Row. “They’ll be more mature than us as players and probably won’t make the kinds of mistakes young guys like us do. But we’re built to not give up. No matter what, we’ll keep pushing until the final whistle.”

The Bhoys blanked JLSFC’s senior team 3-0 in the Region I Amateur Cup final last summer. When asked if Lansdowne’s win over them will boost the team’s confidence going into Saturday, Kelly said: “This is a cup competition and the fact that we beat Junior Lone Star’s first team last season has no relation to Saturday night’s cup game.”

The CSL giants moved past Jackson Brick Lions F.C (NJ) 2-1 in the first round and NY Pancyprian Freedoms 4-3 in penalties after a 0-0 draw to reach the Open Cup’s closing qualifying round.

1. Lansdowne Bhoys is undefeated this season in 15 games.

2. Junior Lone U-23 is the second best scoring team alive in the qualifiers, tallying six goals in two outings.

3. Lansdowne is the second best defensive team in the qualifiers, allowing only one goal, without counting penalty shootouts.

4. JLSFC's two victories in the previous rounds are come-from-behind wins.

Keeper Abdoukarim “Kabo” Danso: Arguably one of the best amateur keeper in the nation, Kabo racked three saves in his side’s 4-3 penalty kick win over NY Pancyprian Freedoms in the previous round.