CSL Round Up with Jay Mwamba! 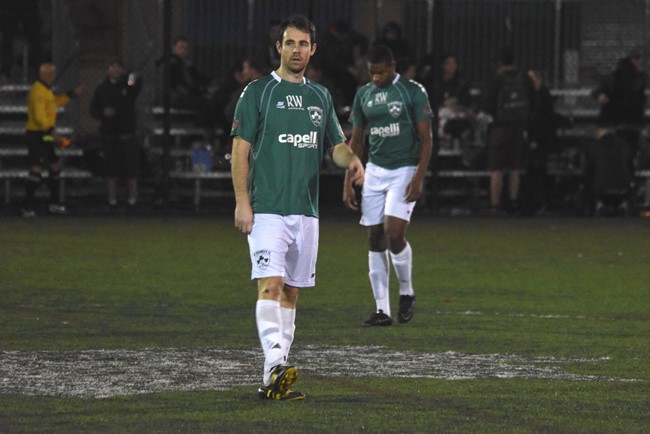 Jean Voltaire [26th] put the Bhoys ahead with a gem of a goal, chesting a Michael Holzer cross and volleying into the top right corner. It looked dire for CPR some four minutes later when they had a player ejected.

The second half remained tight with both teams giving a good effort but looking rusty with the final pass not being accurate, said Lansdowne president William McGrory.

It would take another stroke of genius for the Bhoys to score again. Ovan Oakley latched onto a pass from Craig Purcell, beat his man and crossed low for the onrushing Daryl Kavanagh to connect.

“In general we played with fantastic effort and commitment and they were scrambling to hold on to their lead late on despite a man advantage,” said CPR coach Eli Vovsha.

At any rate, it ended with three-time CSL titlists Lansdowne [9-0-1, 28] going eight points clear atop the standings. CPR [2-2-6, 8] meanwhile remain three points above the drop zone.

FIRST LOSS
The Bhoys’ reserves saw their lead at the top [9-1, 27] shrink to two points after a shock 3-1 loss to CPR ‘B.’ It was their first defeat of the season.

Baba Anne set up a goal for Lulu Binabbas and then finished off a Ricky Bowry punt to give CPR a 2-0 lead.

Mike Fernandez pulled one back following some intense Lansdowne pressure with the Bhoys going on to spurn several chances to equalize. They’d be punished for that by Sjors van Eck’s late strike for CPR.

“With a few key players missing this was always going to be a tough test for coach Sean Kenny’s Bhoys,” said McGrory.

ROCKS SHINE
Later on Randalls Island, Shamrocks ‘B’ beat Zum Schneider 2-0 to improve to 8-1-1 [25] and move within two points of the Lansdowne seconds.

A Joey Aronovsky shot forced a Zum own goal, with Gil Christenberry the other marksman.

WHYTE TREY
The Shamrock firsts had a hat trick from James Whyte in a 4-1 romp over Zum ‘A.’

Kwesi Mills-Odoi finished brilliantly to make it 2-0 after an Abou Kaba assist but Zum struck back [66th] from a corner.

But the Shamrocks reaction was immediate. After Sean Reilly floated a perfect pass to Whyte, the Scot side-footed the ball into the net.

Whyte then completed his hat trick.

“That was a vital win,” said Shamrocks coach Kevin Grogan. “We were average on the ball but in general we were very disciplined defensively - our full back Dan Giorgi was man of the match. James scored three great goals and Kwesi came off the bench and delivered for us.”

Captain Shaun Foster [19th], from a Stephen Roche assist; and Colin Murphy [65th] were also on target for the defending CSL champions.

Almir Hot had both Kicker goals in the reserves’ 2-2 draw.  JT Famularo and Jonnikolas Goiochea scored for NYGA ‘B.’

BIG PAPPA
Kosta Pappa’s header deflected off the keeper and into the net for the only goal in Doxa FC’s 1-0 decision over New York Athletic Club on Travers Island.

The curtain raiser was goalless.

SECOND DIVISION
Hoboken FC’s two undefeated title chasing teams showed no signs of cooling off after the winter break with big wins in the second tier on their spring return.

Hoboken led 4-0 after 26 minutes with Cory Chaplin [19th] the other scorer for the 8-0-1 [25] hosts who lead second place Polonia by five points in the South.

“A good start to the spring half of the season,” said GM Bill Marth.

“We started the spring season just like the field, frozen!” declared Iberia coach Carlos Vázquez. “We had a cold start that saw us down early 3-0. We got better as the game progressed and eventually scored twice.”

Both goals were by winter signings. Jorge "Electrico" Sariego neatly chipped the goalie from outside the box [71st] before Ion "Todoterreno" Barbarin’s effort [84th] went in off the post.

Polonia remain on Hoboken’s tail with 2-1 and 1-0 victories over the New York Ukrainian ‘A’ and ‘B’ squads, respectively, at McCarren Park.

PROMOTION BATTLE
Nipping at Polonia’s heels as the promotion race tightens are Stal Mielec and Williamsburg International who were both rampant last Sunday.

Stal’s Bartek Dziuban notched a hat trick in a 7-1 trouncing of Panatha USA on Randalls Island. Pawel Marczenia [two], Jacek Lawniczak and Slawek Balon also starred for the third place side [6-3, 18], who are two points behind their Polish compatriots.

MARK V
Veteran Mark Gallagher banged in five goals in another Williamsburg blowout, 9-2 at the expense of Beyond FC at Bushwick Inlet.

John Kaddo got a hat trick while Chris Blivin had one goal to keep number Williamsburg [5-2-2, 17] within three points of Polonia and a playoff berth.

Williamsburg’s second unit played out a 4-4 draw scripted by Koji Tsurumi, debutant Rob Markwell, and Arturo Bello who had a brace – with one goal from the spot.

“We were right back at it with 13 goals on the weekend,” noted Charles von Rosenberg, alluding to his club’s high scoring ways.

NORTHERN FRONT
Two points separate the top four in Division Two North, with Brishna ahead after holding off Malatyaspor USA 6-5 on Randalls Island.

Three teams are in a three-way tie two points behind Brishna.

Manhattan Celtic [5-1-3, 16] were the only one of the trio to triumph – defeating Sporting South Bronx (aka Sporting Astoria Firsts) 6-2 at Brooklyn Bridge Park’s Pier 5.

Mohammed "Mo" Jalloh and Kevin Ruiz had the Astoria goals, both off assists by Elroy "Robinho" Benedith.

“Tough match that we had to start with eight [players] and when the 11 guys finally showed [up] we were down 0-4,” rued Astoria manager Ed Romero. “We scored twice in the first [half] but it wasn't enough. We couldn't score in the second and conceded another two.

He added the four goals conceded while playing three players short, and the bad luck of being having two penalties called against, proved a mountain too high to climb.

Team Sporting Astoria (aka Sporting Astoria Reserves) won 4-0. Scorers on the night were Christian Vasquez (header), Francisco Pantoja (2 goals), and Felix Pavon who has been nominated for goal of the year.

COP THRILLER
Also in the North, KidSuper Samba, the other team with 16 points, needed an Arsene Oka equalizer to avoid defeat in a 3-3 thriller with NYPD FC on Randalls Island.

Alhoussain Bah fired the Samba kids ahead -- thanks to Ebrima Jallow -- but Tom Rolston and Diego Martinez turned it around for the Cops.

Jallow then tied it up on Bah’s assist only for Ugur Goktekin to spring NYPD ahead again.
Enter Oka who finished off a Colm Dillane ball to salvage a point for the CSL rookie side.

Lochard Peterson struck twice for the police reserves in a 2-1 comeback victory. Michel Etoundi, from Abdoulaye Diallo, had given Samba the lead.

His trey was the difference in a wild 6-5 Metro One shootout win.

Ryding told his side that only they could beat themselves, before turning to Davis and saying: “And I need a hat-trick from you.”

Deportivo got one back [27th]. But Christian Paredes’ incredible long range shot on the restart -- from what Ryding estimated to be the halfway line – and Davis’ second goal, gave Gottschee a 4-1 half time lead. Paredes assisted on Davis’ second.

The visitors, however, allowed Deportivo to score twice. At 4-3, Gottschee stepped on the gas again. Sean Towey connected and Davis completed his hat-trick.

Deportivo refused to roll over.  They tallied twice more to rattle Gottschee.

“Thankfully for Gottschee, the ref blew the final whistle on the restart and Gottschee took the three points to move up to second in Metro One,” Ryding sighed with relief. “Going forward we were superb but at the lack of discipline at the back almost hurt us.”

Predictably, Davis earned Man of the match honors. “I asked for a hat-trick and he provided it. I should’ve asked for four!” remarked Ryding.

METRO TWO
The top-of-the-table clash in the South turned out to be a mauling with Mola SC dispatching Sons of Queens 5-1 at the Verrazano Sports Complex to take a three-point lead.

FLOODGATES
New York Galicia, who are two points out of second place in the South, swept Gateway FC away 6-3 in a deluge at McCarren Park.

“A good start to the second half off the season. A few slip ups in the back but a great offensive game for us,” said coach Javier Caamano.

Both goals came in the second half with new boy Ruiz [66th] opening his account, on his second club appearance, with a delicate lob from 18 yards.

Rullo also got on the score sheet for the first time [78th] following a two-man breakaway with compatriot James Gerbier.

“[It] was a decent performance but a little rusty,” offered manager Ryan Wiedman. “Plenty of football to play so we must continue the hard work.”

OVER-30
Paddy McCarry’s Shamrocks Over-30s came from a goal down to trounce Mega Atlas 5-3 at Flushing Memorial Park and top the East.

All Shamrock the goals came in a dramatic first half.

“We went one down after five minutes -- a player’s mistake leading to a very soft goal,” said McCarry. “We tied it up after eight minutes, Johnny Keogh scoring from an assist [by] Johnny McGeeney.”

McGeeney then put the Rocks 2-1 up off a Sean Riley pass, only to see the Greeks level on the half hour after a defensive mistake.

However, another McGeeney strike, after he beat three players and fired into the top corner, put the Rocks back in front for good. He set up Shane Moore for Shamrocks’ fourth before Man of the Match Johnny Keogh added a fifth goal, courtesy of Mark Finn.

Megas pulled one back ten minutes from time.

“We played some great stuff in the last 30 minutes of the first half. Other than that we were very rusty after the break and made too many mistakes,” said McCarry. “But we got the three points and a major improvement is needed going forward. All in all, this is to be expected after the break.”