CSL WEEK FIVE ROUND UP! 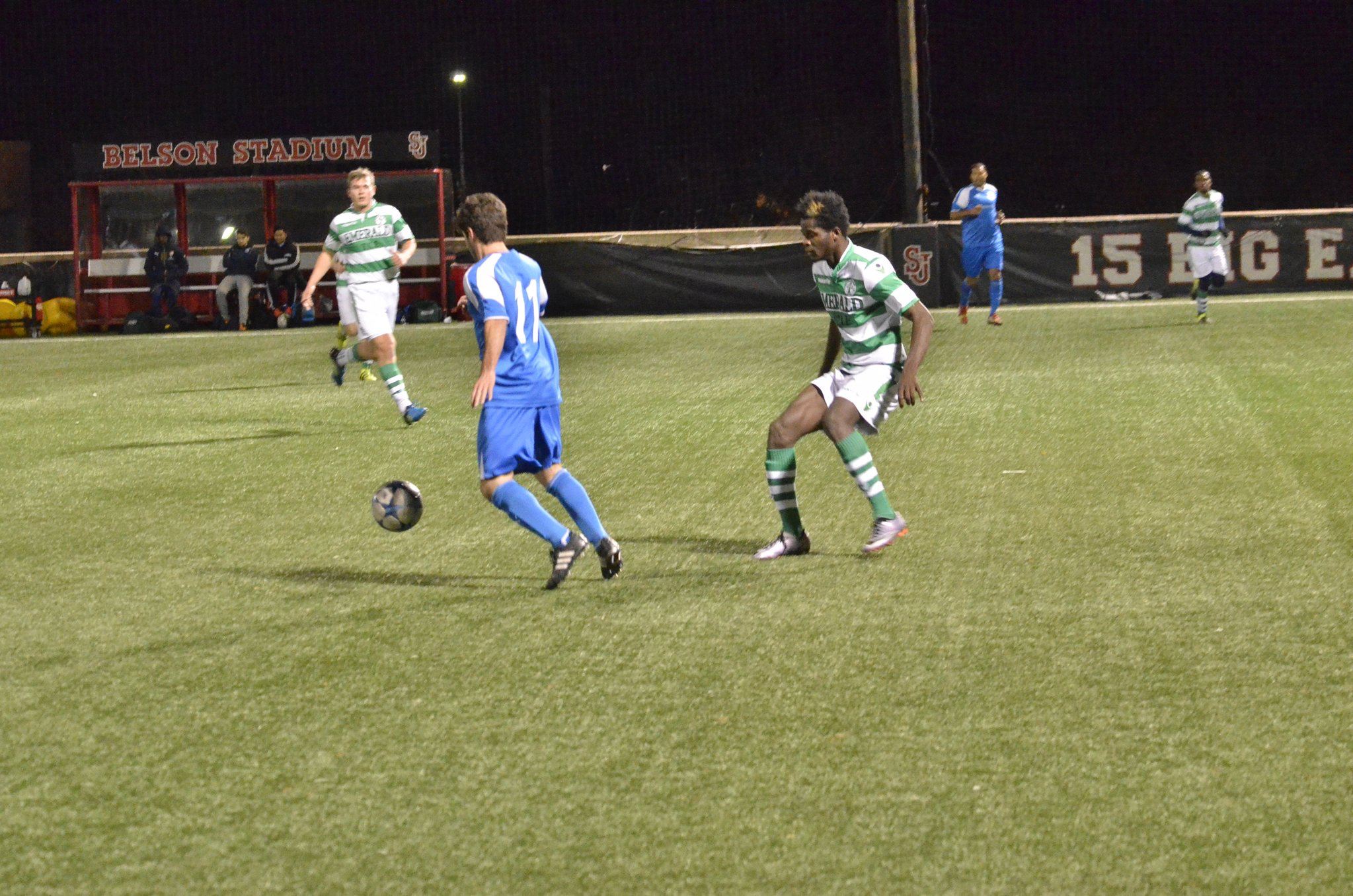 Midfielder Daniel Bedoya [56th] shot Pancyprian ahead in the back-and-forth tussle, but the visitors would then come under siege.

Lansdowne’s sustained pressure would eventually pay off when Voltaire ran onto an Anthony Grant cross at the back post to equalize [85th].

The Bhoys [3-0-1, 10] climbed into sole first place a point ahead of the Greek-Cypriots and the Shamrocks.

PRELUDE
The Bhoys and Pancyprian had both been in action 48 hours earlier.

A missed Whyte penalty proved academic while Kickers’ Bryan Baracaldo hit a post as the Rocks held on.

"That was a very valuable win," said Grogan. "It was an under par performance but the most important thing was that we got the three points."

Shamrocks' reserves made it five wins out of five with a 2-0 decision over Kickers ‘B.’’

CEDAR WIN
Chris Katona had a goal and an assist in Cedar Stars Academy’s 2-1 decision over New York Athletic Club at Ramapo College.

He opened the scoring and set-up Josue Ortiz for the winner. “NYAC is a great young team,” Cedar boss Oliver Papraniku extolled the opposition.

Patrick Viray was on the mark for NYAC with a “really great strike from about 20 yards out,” said coach Erik Bagwell, albeit lamenting his team’s lackluster performance.

“We had the luxury of three strikers so we started in a 4-3-3 [formation] and it paid off immediately, with Gabe Bagot getting on the end of a swift counter attack two minutes in,” said coach Bill Saporito.

Peter Ceesay and Bagot – again -- scored before Spinks finished off the hosts.

Albinot Berisha had Cedar’s face-saver against the Reserve champions.

“Tight game with few chances for both sides,” said Eli Vovsha. “We almost nicked it in the last minute. Ruben Areiza was outstanding as a makeshift center back.”

Faissal Sanfo pumped in a rebound from Vitaliy Firsov's free kick. And after Zum’s Lloyd Shillabeer had leveled, a fine Sjors van Eck brace won it. His first was a volley and the second a solo effort.

BLITZ
Hoboken FC produced a 12-minute four-goal blitz early in the second half to hammer Williamsburg International 5-0 at Bushwick Inlet.

“Mark Gallagher hit the post in the first minute and Hoboken's keeper denied Jordan O'Donaghue on the rebound,” noted Williamsburg’s Charles von Rosenberg. “We created good chances in the first half but couldn't put anything away.”

“Danny Rivas tied the match in the 60th minute, keeping his four-match scoring streak alive. We ran out of gas in the last 20 minutes and Hoboken took advantage with three goals,” rued von Rosenberg.

The Poles bested FC Japan 3-1 [2-1 for the Polish reserves] in the morning while Javi Biero’s double lifted Iberia 2-1 past Stal Mielec in the afternoon fixture.

“We saw ourselves go down in the first half after missing a few chances including one that hit the post by Chello Russo,” said Carlos Vázquez. “In the second half, we regrouped and overcame the deficit with two goals from Javi. Good win for our boys.”

Marcin Jaworek was the Stal scorer.

M&M
In the North, frontrunners Malatyaspor USA and Manhattan Celtic both overcame tricky opponents to remain level on 12-points.

Brothers Engin [two] and Hami Baytar accounted for three of Malatyaspor’s strikes in a 4-2 defeat of CPR Reds on Randalls. Ismail Gul was the other scorer.

Celtic ‘B’ prevailed 4-2 on goals by the aforementioned Amari [two] and Bobby De Stefano [two].

‘C’ CONNECTION
FC Spring Valley’s Carlos Jimenez [two] and Carlos Javier were on target in a 4-3 loss to now second place Brishna. The latter are three points adrift of the joint leaders.

They were 2-0 down when Yankuba Janneh pulled a goal back on Dylan Cope’s assist.  The Cops, who had goals from Gino Cipriano [two], Pat O’Callaghan and Diego Martinez then went up 4-1.

Ebrima Jallow – from Colm Dillane – and Alhoussain Bah [pen.] cut the deficit to 4-3.

And after Ugur Goktekin made it 5-3, a second Jallow effort, created by Chris Peralta, kept youthful Samba alive.

Samba dedicated the match to the late Jorge Palacios, who captained many of the Samba players at Manhattan Soccer Club and Christopher Columbus High School in the Bronx.

He died on Oct. 3, less than three weeks after his 25th birthday.

FC Ulqini hit Shamrocks 1960 for seven without response at St. Michael’s Playground to improve to 5-0 [15].

Lansdowne Bhoys’ Metro One side, meanwhile, slipped 1-0 to Deportivo Sociedade.

“They gave it all but just couldn't get a goal after some well worked chances,” moaned Bhoys’ coach Eugene O’Driscoll. “Then with five minutes left they lost concentration at the back and conceded from a close range effort.”

BOGEY SIDE
Living up to their rep as BW Gottschee’s “bogey team,” NYC Metro Stars edged fellow promotion side 2-1 at Queens Children’s Hospital.

Ecuadorian Giuseppe Romero [34th] Landry Sanon [75th] scripted the victory. The brothers Amvrosiatos, Dion and Stamtatis, combined for the latter to pull one back. Gottschee netted twice more only to have both goals disallowed.

“It was a case of déjà vu for Gottschee as they fell 2-1 to NYC Metro Stars, who were the only team to beat [us] in the last two seasons of league play, and by the same score line,” noted John Ryding. “Every team has a bogey team and, for now, this one seems to be ours!”

“Another big victory for us,” declared an ecstatic Edison Calle, whose side had dropped their first three games this fall before winning two straight now.

He got going after a Gustavo Garro corner had resulted in a Mola own goal. Lynch’s back post header from another Garro corner made it 2-0.

Lynch slotted in his second after controlling John Powell’s long cross and splitting two defenders.  Matt Donovan had the assist on his hat trick.

“The back line of Dave Leboff, Nelson Restrepo, Tim Hattori, Josh Davis and Stefano Archangel finally put together a quality effort to earn our first clean sheet of the season in a solid team win,” summed up Hattori.

Rovers [4-0-1, 13] stayed a point ahead of Sons of Queens, who shutout Brooklyn Bound 4-0.  Queens moved three points clear of a Mola side that had scored 15 goals in its first three league games this fall.

Also in Metro Two South, Cem Aytac and Peter Zima had goals for Gateway and Richmond, respectively, in a 1-1 tie at the Verrazano Sports Complex.

The Armenians also remain unbeaten following a 2-1 decision over Kelmendi, the result of Grigor Kapukranyan’s brace on Randalls Island.

“Midfielder Gabriel Quesquen opened the scoring with a 20-yard blast [17th] on an assist from James Gerbier,” manager Ryan Wiedman reported. “[Gerbier] wasn't done though, as he was able to grab the first half hat trick with goals in the 21st, 26th, and 44th minutes.”

ZENITH RALLY
In boxing parlance, Beyond FC and Grenadier Zenith exchanged knockdowns before the latter scored a late KO in a 5-3 thriller at the Prospect Park Parade Grounds.

“It was a tight game with a lot of near misses on both sides,” remarked Zenith’s Jack Felix.

His side went up 2-0 on goals by Wilkemps Francois and Geraldy Joseph. However, Beyond hit back through Oz and AJ Hammami [two] to lead 3-2.

Zenith would surge back to strike three times, thanks to Peterson Senat, Johny Sainvil [pen.] and an own goal forced by Mimy Duhamel.

Back on Randalls Island, Juan Zaiter and Hasan Redzic scored for an Eintracht side that started with nine men, in a 5-2 loss to Inter New York SA.

Khouri Mullings [Ardian Hasko assist], Nick Bill and Filip Loncar got Premier off to a devastating start, all connecting in the opening seven minutes.

Mullings struck again -- off Marko Loncar’s assist – and then teed up Hasko as the rout continued.

“Kickers took their foot off the pedal and allowed Brooklyn to nick one off the post bringing the score to 5-1,” said player-manager Mike Fitzgerald. “Nick Bill would restore the five goal lead with another assist from Marko.”

On a high scoring weekend in Over-30 action, second place Shamrocks rebounded from the 2-1 loss to Kickers Premier the previous week to thrash CPR Orange 5-0.

“Just the response I was looking for after the loss to Kickers,” said Paddy McCarry. “I’m very happy with the clean sheet.”

His 4-1 [12] side trails Kickers Premier by three points.

Stelio Andreou, Chris Helms, Chris Zisimatos and two-goal hero Taso were on target for the Greek-Cypriots, who finally rolled out a full team after three weeks.

CELTIC DERBY
Adam Darter and Julian Mardare struck for Manhattan Celtic Bhoys in a 2-1 squeaker over Celtic Legends in their derby clash on Randalls Island. John Tanios was the Legends scorer.

With America FC dropping points in a 2-2 draw with Manhattan Celtic Masters, Cozmoz [4-0, 12] went two points clear atop the East.

Bachir Zeroual and Pedro Borges earned Celtic Masters a share of the points against   America FC.

LEGENDS BOW
Shamrocks were the other Legends side on fire in the Over-38 Division.

Marcus Nascimento [two], Eoghan McParland and Andy Connolly connected to record the Rocks’ first win of the season, 4-1 at the expense of SC Eintracht at St. Michael’s Playground.

Glenn Rademacher had the lone goal for Eintracht, who started with nine men.

“A fiercely contested game between two evenly matched teams [and] a tie was probably the right result,” observed Dave Sheeran. “I am so proud of my team for the spirit they showed, 3-1 down going into the last 10 minutes, we never game up and salvaged a point with two late goals.”