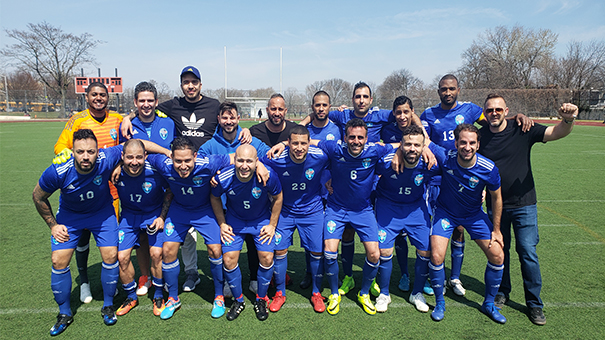 Leutrim “Leo” Saiti banged in a hat trick in a 6-4 drubbing of Panatha USA ‘B’ on Randalls Island to steer the Cedar Stars Academy reserves into the D’Arpino Cup final. They face the Shamrocks seconds who swept past Pancyprian Freedoms 7-1.

Saiti had assists from Danny Barry and Darko Drinic, in between a penalty he converted, in a virtuoso performance.  Josue Ortiz, Roberto Dashi and

Serhii (Sergio) Velykyi were the other scorers.

Panatha made it respectable in the final 20 minutes. With most of the Cedar Stars out of the game, the Greeks netted three times from five free kicks awarded inside the 20-yard range.

At Frank Principe Field, the Shamrocks were level 1-1 with Pancyprian ‘B’ before the Greek-Cypriots suffered a spectacular second half collapse in the 7-1 thrashing.

Serafeim Sakellariou’s kept Pancyprian in the fight until the last 45 minutes.

CSL envoys Stal Mielec, New York Ukrainians and Manhattan Celtic all bowed out of the Flamhaft Cup quarterfinals to opposition from rival leagues.

Mielec forfeited to Real Ole of the LISFL while the Ukrainians and Celtic came up short, both by 3-0 shorelines, against Forrest Park [LISFL] and AC Tumi [EDSL], respectively.

NYC Metro Stars’ Aboudoukadiri, Cheick [pen.], Rafael Gonzalez and Alexis Perez connected in a 3-0 romp over Lansdowne Yonkers. Their reward is a Strumpf Cup semi-final berth against the Kelmendi vs. Beyond FC/FC Sandzak winner.

A 5-4 penalty victory over Glen Cove earned New York Greek Americans Over-30s a place in the last four of the Fritz Marth Cup.

Jimmy Shalom and Enzo Coniglaro scored for NYGA in a 2-2 regulation tie at Flushing Memorial HS.

And in the Vargas Cup, Emin Avsar was on target for Celtic Masters in a 1-0 decision over Doxa Legends.

Celtic advance to the semi-finals.

Pat Viray [16th] and Jake Mann [28th] – off assists by Rafik Mekhaldi and Jimmy Lannon, respectively – got NYAC off to a confident start.

Hoboken rallied to level before the break, Julian Berrios [35th] and Jeremy Witherspoon [43rd] shaking the net.  However, Mekhaldi’s free kick on the stroke of half time would restore NYAC’s lead.

Then with NYAC reduced to nine players, late strikes by Tom Hogue [87th] and Julian Berrios [90 + 2] would script the upset.

The Hoboken reserves clash with Zum Schneider’s first XI in the Kilby semis. This after Zum trounced Central Park Rangers Whites 5-1 in their last eight encounter on Randalls Island.

Lukas Hauer struck three times while Saad Afif and Ivan Berterame had one apiece.  Akeem Brook got CPR’s face-saver.  All the goals came in a frenetic first half.

Doxa recovered from conceding an early breakaway goal by NYAC reserves’ Andre Wilkinson to prevail 5-1 in their quarterfinal tie. “Things obviously went downhill from there,” rued NYAC boss Bill Saporito, who led his side to D’Arpino Cup success last year.

At the Green Belt Recreational Center on Staten Island, the Shamrocks’ Dan Giorgi scored in a 2-1 loss to Ulqini.

Rookie side New York Irish advanced to the Harry J. Saunders Cup semis with a 4-0 shutout of Laberia FC 4-0 on Randalls Island.

“Brilliant team performance and really looking forward to the next round,” said coach Colm Madden.

There the Irish meet a CD Iberia reserve side that overcame Manhattan Kickers ‘B’ 4-3 in a dramatic penalty shootout.

It was 3-3 after 90 minutes with Iberia’s Yudex Bonilla, Matt Jennings and Javi "Perce"Beiro exchanging goals with Kickers’ Tommy Herlihy [two] and David James Stewart. Javi later went in goals for the shootout and made two saves to secure the win.”

“We got by on a close one!” said a relieved Carlos Vázquez, the Iberia boss. “We were short on players and due to some minor injuries we ended up playing short. Javi stepped up to play goalie in the penalty shootout and made two saves to secure the win.”

“Toby Obi showed up late to knock home the first off a corner in his first minute on the field,” reported Tim Hattori. “And Jorge Espanol [got number two] late in the second half on his return to the field following a gruesome injury in the fall. Both were assisted by captain Dave Leboff.”

Also on Randalls Island, Juan Bolona and Kenneth Swords combined to knock off Williamsburg International 1-0.  Bolona set up Swords for the solitary goal.

In pursuit of the only silverware they’ve not won in the CSL, former State Cup holders Shamrocks Over-30s routed Manhattan Kickers Premier 6-0 on Randalls Island.

“It would be nice to win this league cup – it’s the one trophy we have not won,” said Paddy McCarry.

“The game was competitive until the 15th minute when [we] went a man down on a straight red card [for retaliation], said manager-goalie Mike Fitzgerald.

Shamrocks set up an Irish derby with Manhattan Celtic Legends in the Over-30 semis. Legends crushed Manhattan Kickers Legends 6-0.

Raising possibilities of an all-Shamrocks final, Shamrocks Legends overcame Celtic Bhoys on PKs after a 3-3 tie to also make the last four.

The other semi-final berth went to CPR Old Boys who came away from Laurel Hill Park 4-3 victors over Hoboken FC 1912 in regulation time.

“The ref made an absolutely terrible hand ball call for CPR’s first goal, which ultimately was the difference-maker in this game,” protested Hoboken coach Shawn Seiden.