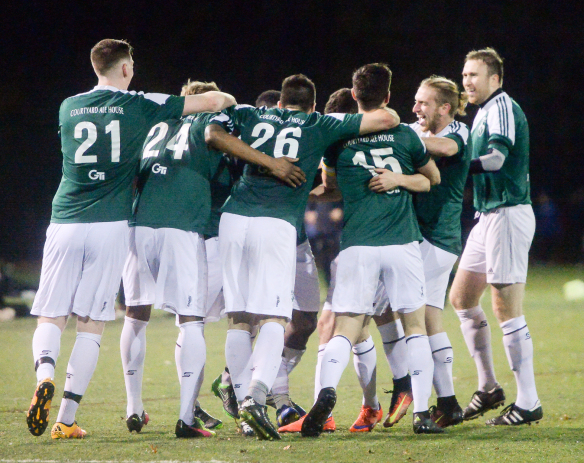 Round 8 fully lived up to its expectations. Cedar Stars Academy’s matchup versus NY Pancyprian Freedoms was one of the most awaited game of the Fall season; the long awaiting period wasn’t in vain as the two clubs displayed the match of the season so far, in which the Freedoms conquered CSA, 4-3.

Pancyprians end the Stars’ perfect season in a 4-3 thriller

Cedar Stars opened the scoring in the third minute when Bledi Bardic steered Christopher Katona’s diagonal pass in the net from the top of the six-yard box.

The Freedoms players knew they were in for a tough game then.

“The way the game started, I could've tell that it was going be a hard game,” striker Shavon John-Brown said, “so we was ready for the occasion. I’m very thankful for the win.”

It didn’t take too long for the Cypriot club to level the scoring as they did so in the 13th minute when Adam Himeno controlled John-Brown’s through ball on a counter attack before hitting a shot to the far right corner.

Pancyprians took the lead in the 22nd minute as John-Brown side-footed Himeno’s cross in the net.

The Freedoms scored a third unanswered goal in the 65th minute when a CSA defender knocked a Himeno's left winged cross in his own net.

Bardic pulled it back 3-2 with his second of the night and 14th goal of the season as he headed Dilly Duka’s pass to the near corner of the net in the 69th minute.

NY Pancyprians went up by two again in the 77th minute. After Bryan Lopez saved his shot on a breakway, Himeno passed the rebound back to John-Brown, who one-timed a shot in the net from the box.

Katona made it 4-3 for the Stars in the 85th minute as he chipped the ball in the net after taking on three Pancyprian players in midfield.

CSA had two crucial opportunities to tie it up later on. One in which Jonathan Borrajo headed Katona’s header off the goal line in the 88th minute.

“We weren’t at our best and fell short,” Zum’s head coach Alexander Berscheid said. “Back to earth, back to reality.”

Former Houston Dynamo midfielder Joe Holland opened the scoring with his first goal for the club in his debut-game in the 30th minute.

Tyler Botte extended the Greeks' lead to 2-0 in the 65th minute from John Sabal’s feed.

ZSFC cut NYGA’s lead in half later in the second half. Saad Afif found Junior Cabrera on the wing, who cut in past two defenders before squeezing a shot in the near corner.

NYGA re-established their two-goal lead in the 80th minute when Adam Marcu led Holland on goal.

Dawda Bah netted the game-winning goal in the second half, heading Jack Doherty’s corner kick to the top right corner of the net.

The Bhoys lift their record to 4-4-0, which places them in fifth spot while NYAC drops to a 2-3-3 record and to sixth place.

Shamrocks get the best out of Central Park 4-2 Alejandro Fritz, Kurt Cameron, Mark Roche and Dan Giorgi were on the scoresheet for the Rocks.

As for CPR, James Greco hit a magnificent shot to the top corner halfway in the first half to make it 2-1. Later in the 70th minute, Kevin Kretschmer pulled it back, 3-2, when he accidently lobbed the ball over the keeper in a broken play.

“We dominated the ball,” player-coach Eli Vovsha said, “but they took advantage of our defensive errors, very disappointing but we can turn it around in our last two games [of the Fall season].”

Stefanos Hondrakis scored the opener for Doxa in the 15th minute from Dominick Falanga’s pass. It was Hondrakis' second goal in two consecutive matches.

Kevin Halliday pulled one back for Hoboken in the 88th minute.

Doxa was unfortunate not to score more than two goals as they hit the post five times.